Nothing too exciting but I came across this music video that I figured others here might find amusing. And yes...it is beer related.…Continue

So I've had my brown ale in the primary for just over 2 weeks now. Itook a sample last night to take a reading and dropped my hydrometerwhich shattered all over the kitchen floor...wonderful.I'm…Continue

Kyle Park has not received any gifts yet

What are your favorite beer styles?
IPA, Berliner-Weisse, Saison, Porter...I don't like to play favorites.

Someone nominated my little beer soaked blog on Bucks Happening's 2012 Happening List which means that apparently someone out there actually reads it! If you have a second and want to see me win, voting is open until February 29th! You can either vote for me in the Blogger or Twitter categories...or both if you feel real adventurous. We wouldn't want a non-beer-blog to win this would we?

It seems like forever since I've been able to brew but I've finally gotten my act together and am ready to brew again. One of my best and oldest friends is heading off to Senegal to join the Peace Corps where she'll be...oh I don't know...making the world a better place for about two and a half years. What better way to send her off than to brew a batch of beer in her honor. I went camping with majority of my family this past weekend out in Manheim, PA which is only 20 minutes or so outside of Harrisburg where
the brothers Trogner have been brewing… Continue 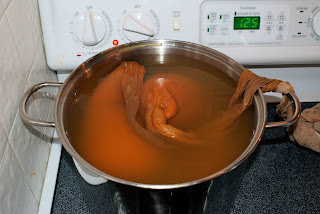 I dived head first into solo brewing a few days ago and it was what one might call a fiasco. I took over the kitchen, cranked up my iPod, poured a brew, and got to work...which took me most of the day. Everything went as smoothly
as one could have expected from…